❝ So what are the main requirements for the ideal PK metric?


You are asking a nasty question – rattling the foundations of BE by NCA. I like it.

❝ Not to change and have low variability?


IMHO, it should be selective, i.e., reflect changes of what we are interested in. For the extent of absorption it’s clearly AUC0–x. It’s another question what the x is… As we have seen in the other thread starting there, we get an unbiased estimate of T/R with AUC0–∞ and AUC0–t(common). How early could we stop sampling (x = ?) to get an unbiased estimate is – as you know – on my to-do list. I still hold that for IR products it’s much earlier than regulators think.
For the rate of absorption? Well, cough. Since Cmax is a composite metric, it can’t be selective for ka. We don’t have to re-invent the wheel; reading educates.1–6 Though I know >50% of the authors personally, I’m not biased.

Results: The outcome of a bioequivalence trial was shown to depend on the measure. Cmax/AUC reflected changes in ka, but not in F. AUC showed dependence on F, but virtually no dependence on ka. For Cmax, a 3- to 4-fold increase in ka and a concomitant 20% decrease in F, as well as corresponding changes in the opposite directions, resulted in bioequivalent outcomes.

Conclusions: It was concluded that use of Cmax/AUC should be discouraged and that defining bioequivalence in terms of rate and extent of absorption has major problems.

(my emphasis)
IMHO, the conclusion contradicts the results. How come? Only because two authors were from the FDA and they didn’t want to change the rules? Why am I not surprised?
A picture tells more than a thousand words. A funny one of the paper: 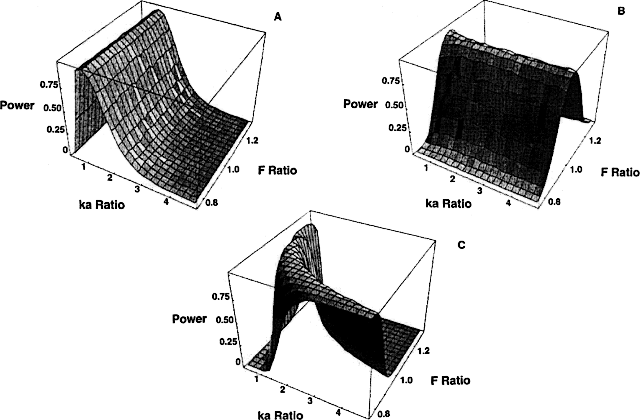 With \(\small{\frac{k_{a,T}}{k_{a,R}}=5\,\wedge \frac{F_T}{F_R}=0.8}\) one has a high chance of passing Cmax (given, will fail on AUC). OK but as stated in the abstract there are combinations where ka and F are clearly different though both Cmax and AUC will pass. Bravo, well done! Great metric.
Reminds me on another paper7 by authors of the FDA assessing the performance of AUC0–t and AUC0–∞. Results: T/R-ratios very similar, AUC0–∞ more variable. The FDA’s consequences: Use both.

❝ Returning to Cmax/AUC - do we need more strict conditions to prove BE on its base keeping in mind its much lower variability (narrow CI for example) - cause it's always within the limits?


Why? The conventional limits are based on the assumption that a ∆ of 20% is clinically not relevant. Leaving NTIDs aside, do we narrow the limits (say, for AUC) only because the variability of some drugs is low? Nope. If we would make the limits dependent on the variability, we would end up in reference-scaling chaos.

❝ (In old (e.g. below 2013) russian protocols I even saw the opposite situation when the confidence limits for Cmax/AUC…

❝ Can you please also clarify the distribution of T1/2: it is always presented as Mean±SD, is it correct? (Mean=Arithmetic Mean).


You rub salt into my wounds. Let’s step back. Rate constants have a unit of 1/time. Hence, the correct location parameter is the harmonic mean. Its dispersion parameter is the jackknife standard deviation (in WinNonlin’s terminology: Pseudo SD). For t½ you have two options: Use the same as well (as I do though I’m not sure about the distribution; Γ?) or go with nonparametrics (x̃, quartiles).
Additional stuff at the end.

❝ It seemed to me I've read somewhere on the forum that for study planning we should use not the mean T1/2 but the confidence level for it, but I couldn't find this thread now.


I’m too lazy to search as well. This one about extremes?


Anything is better than the mean (see this presentation, slides 64–66).

❝ … or should we use other approaches like nonparametric median confidence intervals or bootstrap?


Sounds good though “nonparametric CI” is a little bit strange. I think that I once saw a paper about it, not sure. However, if you don’t have data of a previous study… What you find in the public domain is often x±SD or min/max.

❝ That's correct but too much individual approach - we couldn't know beforehand all the thin nuances of the PD of the specific drug, sometimes it is even impossible to find in literature any PK data for some drugs while planning new study... So I think the overall approach should be more general.


Early and late partial AUCs are only relevant for multiphasic MR products. Luckily I met only three so far: zolpidem, methylphenidate, amphetamine(s). For the first two there is a PD based justification possible. For the last one – no idea.

❝ Why not? The static moments of the plain curve 'Concentration-time' (C(t)) are:

❝ First is connected with MRT (muliplyed by total square of the curve), and the second should reflect some ideal Concentration-unit parameter (the height of the gravity center). Why not to use it like some alternative to Cmax?


Back in the days when I used my own software, I reported all it could calculate (hey, look how clever I am). Arrogant attitude. Confused sponsors and regulators. What I learned: The variability of VRT sucks. Not surprising cause we have \(\small{t^2}\) and \(\small{C^2}\) in it.

❝ ❝ Only nice to print a profile, cut it a out, push a pin through it, and make a weird whizz wheel for kids.

❝ Oh, if we'll proceed further in the power of moments we should be able to calculate moment of inertia - then one can take that curve to the orbital station in order to research Dzhanibekov effect

Didn’t know that one! BTW, the center of gravity can be outside of the profile (scroll down in this post). Aboriginals know that for ages.

❝ Could you please explain this more detaily? What do you mean in getting a reliable estimate of AUC?


I was talking about PK modeling. IIRC, Les Benet said that at the BioInternational in Munich 1994. Not sure whether it’s mentioned in the book. 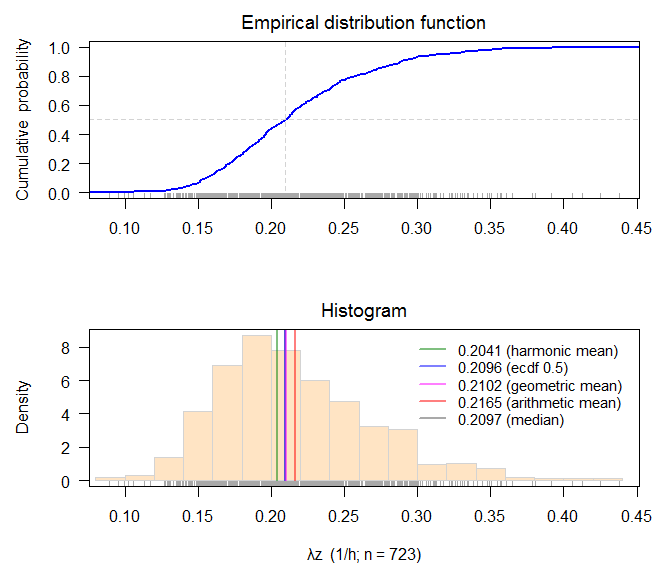 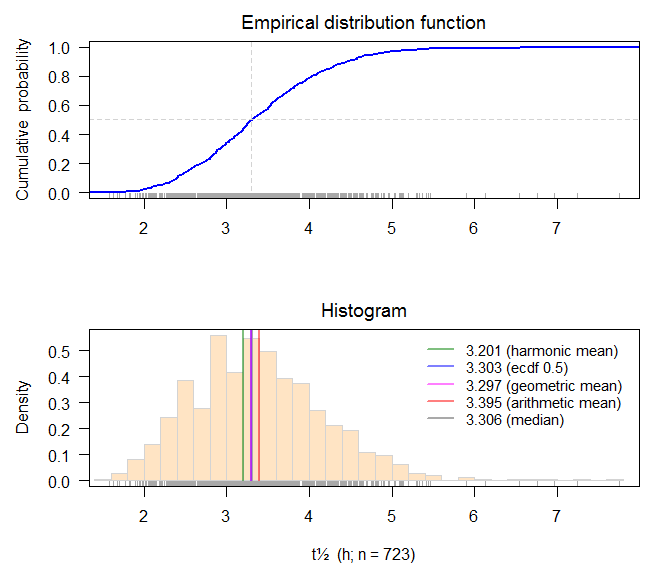 I was wrong for many years. Seems that I have to revise my procedures and go with the median or geometric mean in the future.
—
Dif-tor heh smusma 🖖🏼 Довге життя Україна!