❝ I'm new here and this is a good find.


Welcome to the club.

❝ I was planning to write a bit about Bioavailability,…


Bioavailability (BA), bioequivalence (BE) and an excursion into pharmacokinetics (PK)… 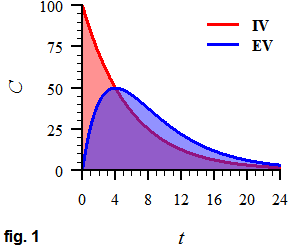 Absolute BA is a$$f=\frac{{\color{Blue}{AUC_{\textrm{EV}}}}\: {\color{Black}\times}\: {\color{Red}{D_{\textrm{IV}}}}}{\color{Red}{{AUC_{\textrm{IV}}}}\:{\color{Black}\times}\: {\color{Blue}{D_{\textrm{EV}}}}}\tag{1}$$where$$AUC=\int_{0}^{\infty}C(t)\tag{2}$$is the Area Under the Curve (\(\small{AUC}\)) as the integral of the concentration-time curve from the time of administration \(\small{(t=0)}\) to infinite time. b \(\small{\textrm{EV}}\) denotes an extravascular c and \(\small{\textrm{IV}}\) an intravenous dose \(\small{D}\). Sometimes you’ll find \(\small{F}\) instead, which is simply \(\small{f}\) in percent. In the example above \(\small{F=100\%}\) because the same doses were administered and \(\small{AUCs}\) are identical. BTW, \(\small{f_{\textrm{abs}}}\) is an oxymoron.
If \(\small{\textrm{EV}}\) is an orally administered solution and \(\small{f<1}\), it means that the drug is not completely absorbed and/or partly degrades in the GI-tract and/or is meta­bo­lized (already in the gut wall and/or the liver). From a clinical perspective a high \(\small{f}\) is desirable because we can expect low variability. On the other hand, drugs with low \(\small{f}\) can be effective as well. One example are bis­phos­pho­nates with \(\small{F\sim 2-4\%}\).
The first part of the \(\small{\textrm{EV}}\)-curve shows absorption, i.e., how the drug permeates through the gastric membranes. That’s a continuous process which decreases with time because less drug remains in the GI-tract.
For some highly soluble and highly permeable drugs (e.g., salbutamol) after an inhalation maximum concentrations are reached extremely fast and the onset of action occurs in less than 15 minutes. Good news for asthmatics. 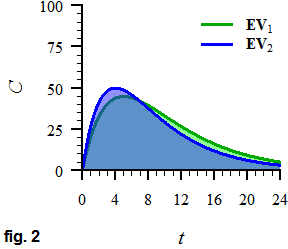 Bioequivalence is the absence of a significant difference in the rate and extent to which the active ingredient or active moiety in pharmaceutical equivalents or pharmaceutical alternatives becomes available at the site of drug action when administered at the same molar dose under similar conditions in an appropriately designed study.

Since this a legal text, “significant” is used here in the common meaning (Merriam-Webster 2 a) and not in the statistical sense (M-W 2 b). The statistical methods are recommended in regulatory guidances. Since they are only a kind of “soft law”, one can deviate from them with a proper justification.
Also note the “site of action”. In general this relates to receptors which may be located at a limited area (e.g., ones regulating blood pressure in the carotid sinus), more widely spread (in the central nervous system), or almost ubiquitous (pain receptors throughout the body except the brain). Biopsies are definitely not an option and generally we measure concentrations in plasma.

Main assumptions and conditions in BE:Generally we perform inferential statistics, i.e., want to come to a conclusion with a certain probability. The significance level of the test \(\small{\alpha}\) is fixed by regulatory agencies with 0.05. That means that the chance that the new product is – erroneously – approved (although it is not bioequivalent) is ≤5%. This translates into a limited risk for patients: If concentrations would be too high, there might be problems with safety (adverse effects, toxicity) and if they would be too low, problems with (lacking) efficacy.
Although applied in the early days of BE, we abandoned testing for a significant difference decades ago. Instead a “clinically not relevant difference” \(\small{\Delta}\) is used, which is generally 0.20 (or 20%). For Narrow Therapeutic Index Drugs (NTIDs) or Highly Variable Drugs (HVDs) \(\small{\Delta}\) might be smaller or larger. d
Concentrations cannot be negative and therefore, assuming that they are normally distributed$$C\in \mathbb{R}\:\vee \{-\infty,+\infty\}\tag{5}$$would be stupid. Instead we assume a lognormal distribution$$C\in \mathbb{R}^+\:\vee \{>0,+\infty\}\tag{6}$$where concentrations are positive.
For convenience (our statistical models require additive effects) we [logℯ-transform our data. This affects also the limits of our acceptance range (AR) \(\small{\{\theta_1,\theta_2\}}\), i.e., for the common \(\small{\Delta}\) of 0.20 we obtain \(\small{\theta_1=1-\Delta=80\%}\) and \(\small{\theta_2=1/(1-\Delta)=125\%}\). Note that in the logℯ-domain (where the analysis is performed) perfectly matching products with a \(\small{\textrm{T}/\textrm{R}}\)-ratio of 100% have \(\small{\log_{e} 1=0}\) and limits are symmetric with \(\small{\log_{e} \theta_1\sim -0.2231}\) and \(\small{\log_{e} \theta_2\sim +0.2231}\).
Then we state two hypotheses:$$H_0:\; \mu_{\textrm{T}}/\mu_{\textrm{R}}\notin \{\theta_1,\theta_2\}\tag{7.1}$$$$H_{\textrm{a}}:\; \mu_{\textrm{T}}/\mu_{\textrm{R}}\in \{\theta_1,\theta_2\}\tag{7.2}$$where \(\small{H_0}\) is the “Null Hypothesis” of bioinequivalence and \(\small{H_{\textrm{a}}}\) the “Alternative Hypothesis” of bioequivalence. Note that we cannot “proove” anything in science; here we hope to reject the Null Hypothesis (and implicitly accepting the alternative of BE).
By means of Harry Potter’s magic wand we obtain from our study a “point estimate” (the most likely result) and its \(\small{100(1-2\alpha)=90\%}\) e confidence interval (CI). Since sample sizes might be small (occasionally only twelve volunteers), we cannot use a test based on the normal distribution f but have to employ the t-distribution. There are three g possible outcomes (see also this presentation, slides 29–30):On another note, my friend Charlie DiLiberti once said:

Ask ten physicians how bioequivalence works and eleven of them will get it wrong.

Many believe [sic] that with an acceptance range of 80–125% two products might differ by 45% ignoring the fact that each of them had to pass BE with the confidence interval inclusion approach. i

Regrettably there is still a negative attitude against generic drugs amongst stakeholders (patients, pharmacists, physicians). k Possibly the perception of “cheaper = of poor quality” triggers a nocebo effect in patients and physicians are mislead by various case reports about “failing drugs”.
In the early days of BE innovator companies tried hard to falsify the concept of BE. They performed therapeutic equivalence (TE) studies in a large number of patients together with BE studies in healthy volunteers. The idea behind was: If the BE study passes and the TE study fails it would show that the concept is wrong. Lot of money spent, no avail; BE “works”. Soon the innovators realized that if they would succeed in falsifying the concept, they would shoot themselves in the foot. l They have also to demonstrate BE when scaling-up manufacturing from the small batches (likely less than 10,000 units) used in their Phase III studies to the final production batch size (sometimes millions of units). Furthermore, BE is also required if the formulation is substantially changed. People would be surprised how far the originator’s product might have ‘drifted’ from the original BA (see this post).

[list=a][*]On the premise of linear pharmacokinetics, i.e., both absorption and elimination are independent from dose. THX to John for pointing that out!
We cannot administer drugs with low \(\small{f}\) at the same dose because the \(\small{\textrm{IV}}\) dose may lead to adverse effects. In a later stage of development dose-proportionality has to be assessed anyhow. Given recent advances in bioanalytics – which allows measuring extremely low concentrations – an alternative is microdosing.
[*]Of course, we cannot measure the concentration until \(\small{t=\infty}\). With a few exceptions (e.g., alcohol) – for \(\small{\textrm{EV}}\) c once absorption is essentially complete – concentrations follow an exponential decrease, i.e.,$$C(t)=C_0 \exp (-k_{\textrm{el}}\times t)\tag{8}$$where \(\small{k_{\textrm{el}}}\) is the elimination rate constant. 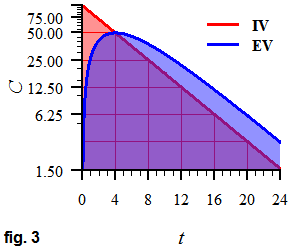 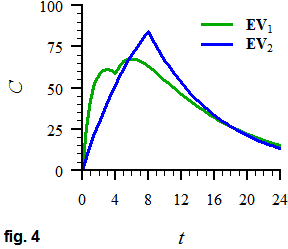 Extravascular means any route of administration which is not intravenous (a fast injection or an infusion), e.g., oral, sublingual, rectal, vaginal, topical (transdermal systems, creams, ointments, …), inhalation, intranasal, ophthalmic, intramuscular and subcutaneous injections, …
Hence, it can be more complicated than in the simple examples before.
In fig. 4 \(\small{\textrm{EV}_1}\) is a so-called “pulsatile” oral formulation, which releases 60% of the dose fast (for a rapid onset of effect) and 40% with a slower absorption \(\small{t_{1/2}}\) after four hours (for maintenance of effect). \(\small{\textrm{EV}_2}\) is a transdermal system, where the patch is removed after eight hours.
[*]For NTIDs in some jurisdictions \(\small{\Delta}\) is fixed at 0.10, which gives an acceptance range (AR) of 90.00–111.11%. The FDA recommends that the AR is “scaled” based of the variability of the reference-drug and – in rare cases – it might be even narrower.
For HVDs \(\small{\Delta}\) some jurisdictions recommend a fixed \(\small{\Delta}\) of 0.25, which gives an AR of 75.00–133.33%. Others recommend “reference-scaling”, where \(\small{\Delta\leqslant 0.3016}\) might lead to an AR of up to 69.84–143.19%. HVDs are safe drugs because they have a flat dose-response curve (large differences in concentrations lead to small differences in effects). If they would have a step dose-response curve they would not get approved first because in the Phase III studies – due to the high variability – there would be an unacceptable high number of patients experiencing AEs (toxicity) and lacking effects. Furthermore, if there would problems become evident in Phase IV studies (post marketing) or pharmacovigilance they would have been taken off the market. In short, HVDs “work” despite their high variability which justifies a wider AR for them.
[*]Why not the 95% CI which is employed in Phase III clinical studies of a new treatment? In those studies a one-sided test is performed (hoping that the treatment is superior to placebo or an established standard treatment). Hence, the patient’s risk (the Type I Error) is 5%. Yes, there is a 5% chance that even a “blockbuster-drug” does not perform better than snake oil… In BE we want limit the patient’s risk to 5% as well. However, in a particular patient concentrations can be either too low or too high but obviously not at the same time. Hence, the 90% CI covers both scenarios in the population of patients.
[*]Like in your example about \(\small{Z}\)-scores. With 50 students it’s fine because the t-distribution approaches the normal distribution reasonably fast. Most people happily apply \(\small{\mathcal{N}}\) if \(\small{n\geqslant 30}\). However, in BE we are a cautious bunch and always use tests based on the t-distribution.
[*]From a regulatory point of view the outcome is dichotomous; either the study passed (#1) or it failed (#2 or #3). From the producer’s perspective only #3 is a disaster. In the gray zone (#2) there is still hope.
[*]All applicable regulatory guidances mandate that the study is designed for a certain – high – power (i.e., 80–90%). Quoting the guideline “Statistical Principles for Clinical Trials” of the International Council for Harmonisation:1 – power is the ype II Error or the “producer’s risk” that the study fails to demonstrate BE although the products are BE. Including more volunteers in order to decrease the chance of failing (e.g., below 10%) likely will not be accepted by the ethics committee / the institutional review board.
[*]If the true \(\small{\textrm{T}/\textrm{R}}\)-ratio would be 80% or 125%, even a study with the entire population of our lovely planet will fail to show BE since the lower (or upper) confidence limit would be outside the AR.
[*]Davit BM, Nwakama PE, Buehler GJ, Conner DP, Haidar SH, Patel DT, Yang Y, Yu LX, Woodcock J. Comparing Generic and Innovator Drugs: A Review of 12 Years of Bioequivalence Data from the United States Food and Drug Administration. Ann Pharmacother. 2009; 43(10): 1583–97. doi:10.1345/aph.1M141. PMID 19776300.
[*]Dunne SS, Dunne CP. What do people really think of generic medicines? A systematic review and critical appraisal of literature on stakeholder perceptions of generic drugs. BMC Medicine. 2015; 13:173. doi:10.1186/s12916-015-0415-3. PMID 26224091.

Open access.
[*]The Phase III study of the first statin (simvastatin) was performed in thousands (‼) of patients. Such a high number was required to demonstrate superiority to a low-cholesterol diet; the study took 5½ years. Can you imagine how many patients would be required to show a difference between two products of ≤20%? Maybe 12,000 and the study would take ages to complete.
BTW, Phase III studies of two COVID-19 vaccine candidates started in 30,000 volunteers each…[/list]
—
Dif-tor heh smusma 🖖🏼 Довге життя Україна!

Statistics is the art of never having to say you’re wrong.
Variance is what any two statisticians are at.    C.J. Bradfield