Dear all (and esp. my friend Osama

following this post dealing with BE drift in fixed dose combinations, some desultory thoughts.
The first papers on the topic appeared in the late 1999s1,2 and gained new attention recently.3,4 See also this post about switching.
Anderson & Hauck already noted that for six variations of the reference (all supported by BE studies and the ideal condition of Δ = 0), the chance that the last one is not BE to the original one is up to 27%. For a more realistic Δ = 0.05 the chance increases to up to 73%. At one of the BioInternational conference Martin Siewert of Schering presented an example of 13 (‼) variations – all supported only by in vitro data.
The WHO had a hard time finding a “global comparator”, i.e., the one which unterwent the least variations and therefore, can be reasonably assumed to be closest to the product used in the originator’s Phase III studies and hence, could be used in countries were the originator is not – or no more – marketed. 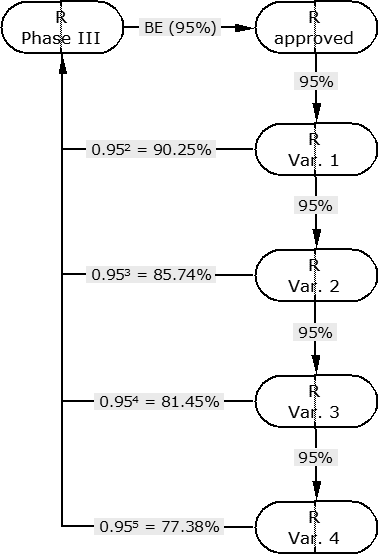 Let’s consider a simple example. Only four variations, all supported by sufficiently powered in vivo studies which passed, considering only the PE here.Given, this is an artificial example where all changes went into the same direction.

Recently I faced a stupid case. The formulation underwent eight variations which were considered minor in all jurisdictions (the product is approved in 40+ countries) and dissolution similarity was sufficient.
When my client submitted the package (lots of studies) to Health Canada – where a foreign reference is acceptable if certain conditions are fulfilled – the answer was: “Thank you very much for the wealth of interesting data. However, please note that the TPD considers variation #3 a major one and hence, we cannot approve the product.” Oops.

Now generics come into play. It’s never known which variation of the reference we are dealing with; there is always only the most recent one on the market. Say, two generics enter the scene early when the reference underwent only one variation. Then the picture might look like this: 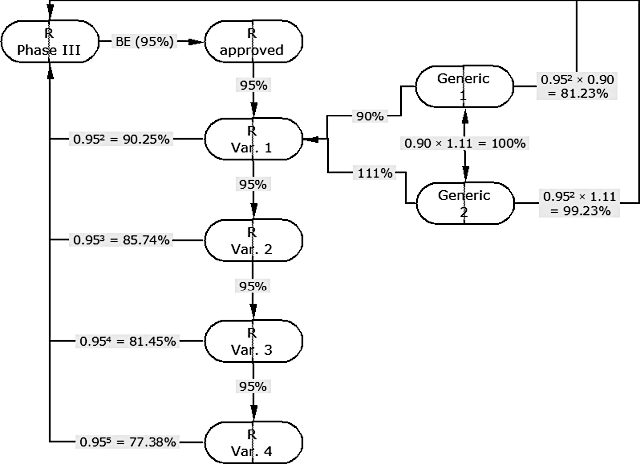 Both generics are BE to the reference. Since their Δ are in different directions, they are perfectly switchable (which must not be the case if their Δ is large and going in the same direction). Is generic 1 BE to the originator’s Phase III batch? Possibly not but asking this question is heresy. Interesting is generic 2. It might be closer to the Phase III batch than the originator’s 1st variation and the one which got approval. Funny.
Now imagine other generics entering the game later and we are in limbo.

So why are there no dead people lying in the streets? Our rules for BE are arbitrary and possibly too strict for a single (‼) comparison. Nevertheless, even with problems caused by variations and generics entering anywhere in the stream, ABE being not designed to assess switchability, obviously the concept still works. Lucky us.