Oh Gush! Loss of lubrication is the one of the components of diseases causing arthroplasty.

❝ Given all that, I’m asking myself on which data the FDA’s model is based upon and how reliable they are.

Citing the original article:
The lack of agreement between observed data and model predictions on diclofenac amounts in the presumed site of action, the synovial fluid, even after model refinement can be attributed to the differences in physiology between the muscle and the synovial fluid; the muscle compartment was modified to mimic the synovial fluid only in terms of its volume without changes in the physiology. For instance, protein expression, diclofenac partitioning and diffusion, and extent of vascularization may be some of the differences between the muscle and the synovial fluid physiology and its interplay with diclofenac that were not taken into account. Finally, a suboptimal model performance may be attributed to not accounting for the disease (osteoarthritis) pathophysiology—namely, the increase in the synovial fluid volume and local blood flow commonly reported in patients with knee osteoarthritis due to inflammation; model predictions generated in virtual healthy volunteers were compared with observed data collected in patients. 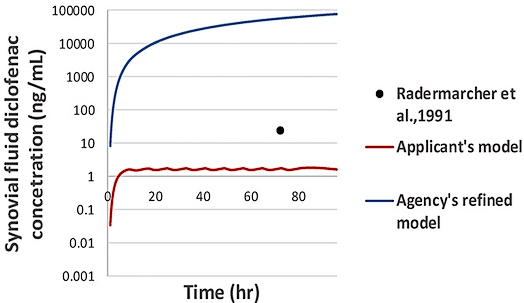 When you worked hard and the experts were involved, some fails could be named just as suboptimal results