❝ 1. Let us look at the wikipedia page for the t test:

❝ "Most test statistics have the form t = Z/s, where Z and s are functions of the data."

❝ 2. For the t-distribution, here Z=sample mean - mean and s=sd/sqrt(n)


Wait a minute. You are referring to the one-sample t-test, right? At the Assumptions we find$$t=\frac{Z}{s}=\frac{\bar{X}-\mu}{\hat{\sigma}/\sqrt{n}}$$That’s a little bit strange because WP continues with

I beg your pardon? Most of my textbooks give the same formula but with \(s\) in the denominator as the sample standard deviation. Of course, \(s/\sqrt{n}\) is the standard error and sometimes we find \(t=\frac{\bar{X}-\mu}{\textrm{SE}}\) instead. Nevertheless, further down we find$$t=\frac{\bar{x}-\mu_0}{s/\sqrt{n}}$$THX a lot, soothing!

❝ 3. Why are Z and s independent in this case? 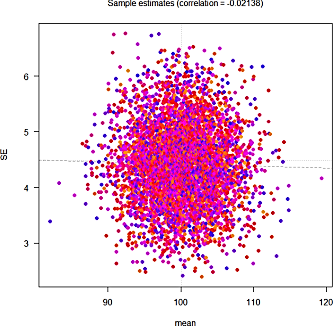 Here we know the population mean. Hence, the numerator depends on the sample mean and the denominator on the sample’s standard error. They are independent indeed.
I added another plot to the code of this post.

❝ Or more generally, and for me much more importantly, if we have two functions (f and g, or Z and s), then which properties of such functions or their input would render them independent??

❝ Wikipedia links to a page about independence, key here is: […]

❝ I am fully aware that when we simulate a normal dist. with some mean and some variance, then that defines their expected estimates in a sample. I.e. if a sample has a mean that is higher than the simulated mean, then that does not necessarily mean the sampled sd is higher (or lower, for that matter, that was where I was going with "perturbation"). It sounds right to think of the two as independent, in that case.


Correct. Anything is possible.

❝ A general understanding of the idea of independence of any two quantities derived from a sample, that is what I am looking for; point #3 above defines my question.


Still not sure whether I understand you at all. Think about the general formulation of a test statistic from above $$t=\frac{Z}{s},$$where \(Z\) and \(s\) are functions of the data.
I think that this formulation is unfortunate because it has neither to do anything with the standard normal distribution \(Z\) nor the sample standard deviation \(s\). For continuous variables I would prefer sumfink like$$test\;statistic=\frac{measure\;of\;location}{measure\;of\;dispersion}$$for clarity. If a test would be constructed in such a way that the independence is not correctly represented it would be a piece of shit.
—
Dif-tor heh smusma 🖖🏼 Довге життя Україна!

Learning of many things
does not teach intelligence.    Heraclitus of Ephesus