I just installed R v4.0.0 and bear on Catalina under virtualbox (VM). It is the same as previous steps on Mojave (see the attached picture). That is to install Xcode, Xcode commander line (both can be downloaded from Apple Development Center; login req.), MacPorts and XQuartz. Then install R v4.0.0 and GNU Fortran as described in CRAN website. No need to install RGtk2 & cairoDevice packages separately. I have already included these steps into 'preinst.r'.

This is a new warning message to me. However, it still runs well. I need to find out how to solve the issue (OpenGL renderer stuffs; it seems there is no way to fix it. It's Catalina. OpenGL has been deprecated by Apple. Please see this and this). 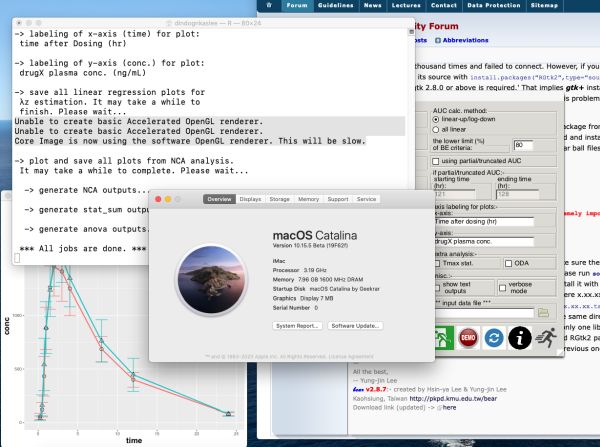 Many people tend to look at programming styles and languages like religions:
if you belong to one, you cannot belong to others.
But this analogy is another fallacy.    Niklaus Wirth