since many of us are working at home now, consider donating your idle computation power to [email protected]* (see also the Wiki-article). The software is available for Windows, macOS 10.7+, and 64bit Linux. With the end of March users provided 600,000 CPUs and 430,000 GPUs. Their distributed speed reached 1.3 exaFLOPS last week, outperforming the currently leading supercomputer (IBM’s Summit) by one order of magnitude.

Note that you have to own the machine. Otherwise, ask your company for permission. 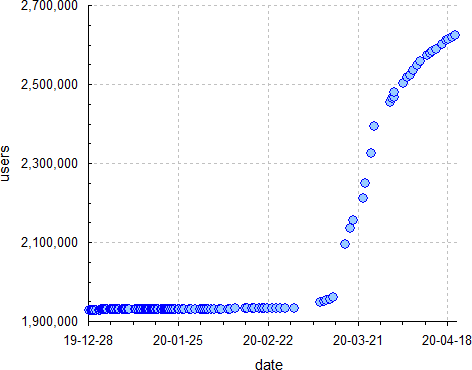 I lost 4,500 ranks since mid-March. Great because recently many users (including big players like Oracle, avast) joined the party (see the image).

The software allows a lot of adjustments. Since I don’t encode videos or play 3D-games, my GPU with its 64 CUDA cores is bored. Hence, I fold on the GPU whilst leaving the CPU free for other stuff (like Phoenix, sim’s in

). For a while I used six threads of the CPU but it’s not worth it – on the average out­performed by the GPU by a factor of ~8.5.

Don’t worry to toast your machine. The software monitors the CPU’s/GPU’s temperature and goes for at least 15 minutes into idle state if the system gets too hot. The software comes with a large database of CPUs/GPUs and ‘knows’ their critical temperatures. I never faced that in ½ year, neither on my workstation nor my notebook. The former runs 24/7 and is fanless.
If the noise of the fans in your machine annoys you, drag the slider in the Advanced Control to the left. You can pause/resume folding at any time. If you want to shut down your machine, I suggest to ⏸️ Pause folding first. The project(s) will automatically resume folding after a reboot.