❝ It's really amazing and unbelievable. I think your first NCA codes running on TI-59 probably is the first NCA computer program in the world.


I don’t think so. I’m pretty sure that Carl Metzler’s NONLIN for a Sperry Univac mainframe could perform NCA left-handed. I wrote him a letter (yes, paper!) in 1982 and asked for the code. A couple of weeks later I received a 10.5" diameter reel of ½" 9-track magnetic tape. When I went to my IT department, they told me “Hey, we run a business here. We have COBOL! A FORTRAN compiler will cost 25,000 bucks. Go and find another playground.”


It was. Learned the hard way to keep the code short. You had to find a compromise. The longer the code, the less storage registers you had and vice versa. But it was a pain in the back. Procedure was like this: Enter t/C-pairs for a subject. NCA performed and stored. When one formulation was finished, start over with the next one. Then the memory was almost full. Read another memory card, overwrite the NCA-code with the one for stats. Press a key and get the PE and CI. Studies were randomized but everybody used just a paired t-test. ANOVA on a TI-59? Didn’t even dream about it.

❝ Frankly speaking, I still did not know what a 'computer' was in 1981. Not to mention computer programing. 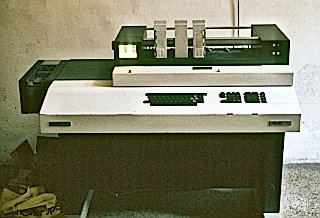 I started with a Philips P354 in 1976. Punch card reader and the dreary green bar paper. It was used by the Austrian national bank for some years and when we received it as a gift it showed signs of heavy use… The one in our IT-lab. →
Note the pile of paper in the left corner. When you made a single mistake in punching the cards, the output went straight there. My first code was the bisection algo for finding roots of arbitrary functions. Took me two weeks…
On the other hand we were lucky to have this 180+ kg monster when “time-sharing” was the norm: You send the code to the university’s computing center only to get two weeks later a hand-written note saying “Did not compile, execution stopped with buffer overflow. Revise.”

Heinrich Koch of the University of Vienna proudly showed me his HP 85 and the code he developed with Wolfgang Ritschel at the university of Cincinnati. Crashed during the demo. I was not convinced. There were rumors that together with a Wang 2200 you get PK software “for free”. Wang had no representative in Austria and I didn’t want to trust on promises of the one in Germany. First steps into the world of dektop computing with an HP 9845 learning Pascal.

Saw my first one in New York in 1983. Didn’t know what to do with the one-eyed mouse.

❝ Thanks for sharing your experiences in computer programing.


Welcome. Now you know why I was so happy to start with R (1.4.0 in 2001). A simple console, weighted polynomial regression just one line of code. Wonderful. I still write the php-scripts of the forum in a simple editor. I have fancy IDEs (Eclipse, Aptana). Never use them. Okay, boomer.