❝ While verifying the source documents of period 1 (at this time the wash out period is running), I noticed that the investigation site was administering parenteral hydration to the subjects since the first sample (pre-dose) was collected and during about the next 12 hours. The administered volumes were different between subjects and went from 1000 to 2500 ml. 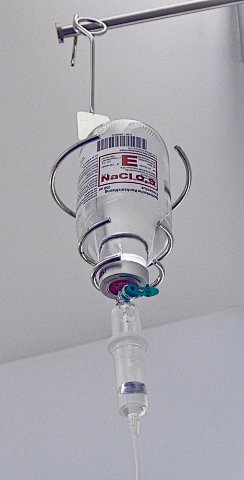 IMHO, that’s bizarre. Never heard of anything like this before. Even for a potent diuretic, water ad libitum is sufficient to keep volunteers hydrated.

❝ This procedure wasn’t established in the study protocol.


That’s a major protocol violation for at least two reasons:

❝ So we asked the principal investigator (PI) about that practice, their reasons and possible impact on study (since we send him the question by email I don´t have any answer yet).

❝ I´m concerned about this situation.

❝ I have doubts about the potential impact on the results of the study but I don´t have the tools to “scientifically” support “my doubts”….

❝ Thinking in next period of the study, the PI and his team have at least to repeat exactly the same (volume, times, etc) parenteral hydration than in first period, to not increase intra subject variability?


#1 above is a clear violation of GCP. On the other hand, if #2 hits (unknown…) you want to keep conditions of the second period like in the first, which violates GCP again. Extremely nasty situation.

❝ Do you thing administering parenteral hydration is a good practice in a BE study?


No. BE is a surrogate of therapeutic equivalence (that’s the most important assumption). Studies are performed in healthy subjects instead of patients to reduce variability. It is accepted practice to reduce variability further (in-, exclusion criteria, standardized meals, limited physical activity, etc.). But: Are patients receiving this drug routinely on parenteral hydration? Even if the answer is yes, why was the procedure not stated in the protocol?

❝ Could the results of PK parameters been affected?


Maybe, maybe not. As I wrote above in #2 the volume of distribution might be affected. Once homeostasis sets in (i.e., the renin–angiotensin system is activated) increased renal excretion will counteract that. If the drug is mainly excreted via the kidneys, clearance increases (half life decreases) and you will see lower concentrations than usual.

❝ what about de BE conclusions?


If you continue like in the first period, likely results are fine. However, the violation of GCP is a serious issue. Think about setting the study on hold, update the ICF, get a new IEC vote (hopefully positive), and proceed. I can image that regulators are not happy with this study – regardless its outcome.

Maybe better: Stop the study. Your legal department should check the contract with the CRO. I have seen CROs repeating studies at their own cost in much less problematic cases.
—
Dif-tor heh smusma 🖖🏼 Довге життя Україна!