» » By the linear trapezoidal method (dammit!)…
» For some reason (may be for it's simplicity) russians like linear method and include it into the protocols.

Simplicity or simple minds? SCNR. Following textbooks of the 70s of the last century? No pocket calculators? Even in f**ing Excel one can implement the lin-up/log-down.

» I recalculated via lin-up/log-down and now I'm puzzled with a new question: why do Cτ's differ by the way of calculation AUC? For linear I've got 3,38... 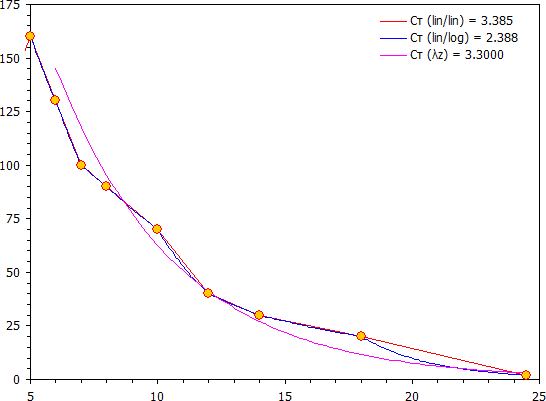 » Is it correct to use t0 and t1, if dosing time happened between this two points? I mean for the time before dose (t0), the curve should be decreasing exponentially, while for the t1 it should be rising similar to linear?

Good point. Unfortunately we don’t know the elimination of the previous dose.

» I was lucky enough not to get it till now but shit happens, you know, and a danger foreseen is half avoided. Is it a bad idea to miss that BLQ for ss elimination part?

Maybe, maybe not. Depends on your sampling schedule and how much the previous concentration is >LLOQ.

» What is about regulatory's acceptance of any of the calculation modifications? I may use profound methods of numeric integration, but would it be accepted?

Duno. I always describe exactly what I plan to do in the protocol. Never got any questions afterwards. Believe me, I would make the life of an assessor miserable if at the end he/she doesn’t buy sumfink which was approved by his/her own agency and the ethics committee before.